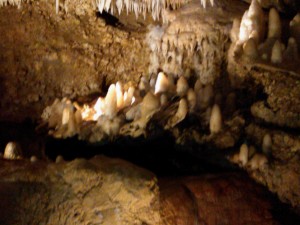 International Day for Biological Diversity was observed on May 22, 2013 with the theme “Water and Biodiversity” being the focus.  As part of its ongoing public awareness activities, the Ministry of Environment and Drainage partnered with local primary schools to host a series of tours to the island’s Harrison’s Cave during the week of the International Day for Biodiversity.  Tours were conducted on Tuesday, May 21 and Friday May 24, 2013 with students from different primary schools attending the tours on each day.  The tours on Tuesday, May 21 were comprised of students from the Wesley Hall Infants School’s Blossoms group in the morning and students from St. Bartholomew Primary in the afternoon.  Friday’s tours were attended by students from St. Christopher Primary, Ellerton Primary and Wesley Hall Infants School’s Environment Club.

Figure 1: EO Downes Agard speaking to the children of St. Christopher’s Primary before their tour.

On the first day of tours, Environmental Officer (Biodiversity), Kim Downes Agard, traveled to St. Christopher’s Primary School and spoke with the students, taking the opportunity to explain to the students the reason for the tour.  She informed those who were unaware that it was International Day for Biological Diversity, and she informed them of the theme for the year.  She then went on to educate the students on the meaning of ‘biodiversity’ and helped them to identify with the concept through the use of every-day examples.  Once the students were made to understand the purpose of the field trip, the tour could begin.

On each day, upon arrival at Harrison’s Cave, students of the respective schools were ushered into the Interpretation Centre where they were educated on the formation of the island and the role of marine fauna, specifically coral, in the formation of Barbados’ landmass.  This message allowed the young ones to understand the connection between Barbados’ largest aquatic resource, the ocean, and its biodiversity; while drawing their attention to the influence that this connection has on the terrestrial environment and the lives of terrestrial organisms.

Figure 2: Image of the Interpretation Centre.

The role of these marine organisms and the reefs that they have formed, over centuries of growth, was then expanded upon in the context of the present day where it was explained that the island’s reefs form a crucial barrier against storm surges and other wave activity as a result of bad weather.

The focus of this lesson then moved inwards towards the terrestrial environment of Barbados, where the water’s effects on shaping land and creating unique habitats for the island’s rich biodiversity was expounded.  By learning how ancient water flows carved the limestone that makes up much of Barbados’ land mass, the children were made to understand the origin of caves such as Harrison’s Cave as well as those that had collapsed to form the island’s gullies.  It was further explained that these gullies are host to a large percentage of the island’s wild flora and fauna, with the water courses flowing beneath them nurturing the rich vegetation that in turn supports diverse bird, mammal and insect life.

Next, it was time for the students to witness the capacity for water to shape and create habitats for biodiversity firsthand as they were taken on a tram-tour of the cave.  Here they were taught about the natural filtration provided by the island’s limestone cap, which filters sediment and other impurities out of the natural ground water supply.  It was then explained to the students that the filtered water, alleged as being safe for consumption in its natural state, ran beneath much of the island and served as the ‘back-bone’ for much of the island’s biodiversity. 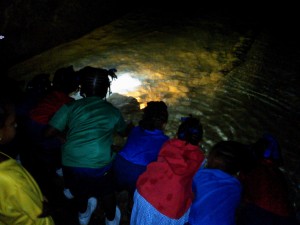 Figure 3: Students of the Wesley Hall Infants School Blossoms Group getting a hands-on experience of the underground streams.

At this point of the tour, the children were allowed to exit the tram and walk around on the interior of the cave so that they could see and even touch the constant flow of water that was responsible for shaping the active cave system.

It was explained that much like how the island’s gully systems ‘stretched out like fingers’ from the centre of the island towards the coast, these underground streams also permeated the land and distributed water to all edges of the land to support the flora and fauna that so heavily depend on them.  The children were then asked to think of the effects that a lack of water would have on living things, to which they promptly responded with the effects of dehydration.  At this point the connection between water and the sustainment of life was clearly established.

The children were then ushered back into the motorized trams and taken through the rest of the cave.  In addition to shaping habitats for biodiversity, the students were also educated on the many features formed from the water deposits.  They were amazed by stalactites, stalagmites and flow-stones along with other calcium carbonate deposits as they explored the rest of the cave.

Once this was done, the children were treated to lunch and allowed to enjoy the facilities of Harrison’s Cave in their own way, under the supervision of their teachers and the staff of the Ministry of Environment.