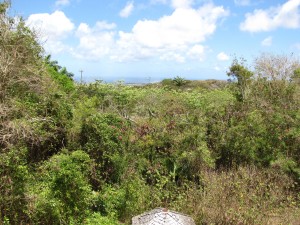 Fig 1: Students of the St. Bartholomew School queuing up and preparing to enter the Wildlife Reserve

In the spirit of the theme for the year, activities were chosen to highlight local flora and fauna in one of the islands conservation facilities, the Barbados Wildlife Reserve.  In accordance with our annual public awareness and education programme, activities were planned for four primary schools: Wesley Hall Infants School, Ellerton Primary School, St. Bartholomew Primary School and St. Christopher Primary School.

These activities were in the form of tours, run over the course of three days with the International Day for Biological Diversity falling in the middle.  Tours were conducted of the Barbados Wildlife Reserve and the adjacent Grenade Hall from Wednesday 21, May to Friday 23 May, 2014.

Tours of the Wildlife Reserve on each day began with an introduction of the facility, where it was explained to students that the compound provided a simulated natural environment in the ‘forest area’ where persons could interact with uncaged species.  The students were guided along a foot-path, where they were exposed to a number of native and non-native species, the most abundant of which is the abundant red-footed tortoise.  These slow moving terrestrial animals littered the ground of the forest section of the reserve, living among the many other inhabitants of this section without conflict. 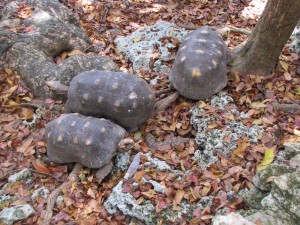 While much less ubiquitous, the spectacled caiman present in the ponds of the facility tended to be the most attention grabbing species in the forest area, with students crowding the viewing area to observe the animals and learn more about this non-native crocodilian species.

The students learned about the areas in which this species naturally occurs as well as its diet and hunting strategies.  They even got a practical lesson in one of the species’ particularly useful evolutionary adaptations as they were asked to enumerate all of the individuals present.  Their difficulty with this task was due to the creatures’ ability to camouflage themselves in the murky waters

Fig 3: Spectacled caiman (Caiman crocodilus) in one of the facility’s wading ponds

The reserve’s reptile population was not the only thing on display in this area of the facility however.  Among the almost ubiquitous red-footed tortoises, a number of avian species also made their homes.  The trees of the reserve were home to a number of native species such as the local bananaquit, grackles and doves; while on the ground guinea fowl and peafowl traversed the environment in search of the odd meal.  Among these bird species the peacocks present generally caught the attention of the students, prompting an educational session about sexual dimorphism in the species and a very simplified overview of sexual selection among the species responsible for the impressive tails of the male peafowl. 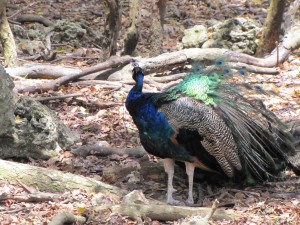 Fig 4: One of the Reserve’s Peacocks (Pavo cristatus)

The students were also educated on the Brocket Deer and Mara before they were led out of the forest area of the reserve and into zoological section where caged animals were displayed.  Immediately upon entry, the students were taken to observe the reserve’s largest reptile species, the reticulated python, before they were allowed to view the other snake species on display.  In this area the students also got a chance to see aquatic turtles, the mudskippers and Cuban Iguanas.

Lastly, the students were taken through a tour of the aviary, where a number of bird species indigenous to the Caribbean were on display such as the red and green Macaw as well as the blue and gold Macaw.

Fig 5: Environmental Officer Kim Downes Agard explaining the significant of the day and its activities to students of the Wesley Hall Infants School.

After a lengthy tour of the Wildlife Reserve, the students were taken over to Grenade Hall where they met with Mr. Nigel Jones, a Dendrologist and Senior Technical Officer of the National Botanic Garden.  Mr. Jones served as the guide for the second part of the day’s activities, walking with the students through Grenade Hall to identify the various species of flora.

Mr. Jones began the day with a general lesson, explaining the difference between common names and scientific names of species, using age-appropriate examples to ensure that the students understood the importance of the distinction.  He then went on to educate the students of some of the unique properties of each species; from the production of useful or sometimes toxic saps, to the pigments responsible for the colour-changes within their leaves.  With each example, Mr. Jones provided the students with vital knowledge on the ecological value of the species as well as its value to people.

Examples of their value differed with each plant, ranging from those used in traditional medicines, teas and foods to those with more direct economic value such as the local mahogany species which is highly sought after for use in furniture and ornaments.

The walk through Grenade Hall lasted about forty-five minutes on each day and covered a wide range of local plant species found in this heavily wooded area.

Fig 6: Senior Technical Officer Nigel Jones educating students of Ellerton Primary on some of the local species of fauna.

Upon completion of the tours, the students were taken to Farley Hill National Park for lunch and were allowed to enjoy the facility under the supervision of their teachers.