Land degradation affects biodiversity both directly and indirectly and loss in biodiversity affects soil cover.  Therefore the linking of these programs within the Ministry and joint implementation allows the Ministry to efficiently utilize its limited human resource and financial capacity and implement programs with significant impacts as evidenced by the public awareness programs and its focus on schools.

In recognition of the theme of the 2013 World Day to Combat Desertification and recognizing the importance of engaging the young impressionable minds of our children, to ensure change, the Ministry used the week of the 17th -21st to raise awareness of the significance of managing Barbados’ natural fresh water sources and the subsequent importance of preserving our scarce land resources by conducting tours of the Scotland District and the Soil Conservation Unit.

As part of its public awareness programme the Biodiversity and Sustainable Land Management Programme of the Ministry work on a continuous basis with a number of schools on the island. This year the adopted schools participating in this week of activities are: St. Christopher’s, Ellerton Primary and St. Bartholemew’s Primary School.

The first activity took place in the Scotland District on East Coast Road, in St. Andrew the former site of the Party Monarch, a large national outdoor concert.   This is an area that has been subjected to erosion and compaction over the years due to various activities.  The  Biodiversity and Sustainable Land Management Program has also collaborated with the National Conservation Committee (NCC) to undertake a re-vegetative exercise in this area to preserve the top-soil as part of the Sustainable Land Management Project. 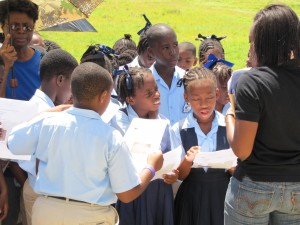 The activity in this area was focused on educating children about the particular type of soil in the Scotland District which is clay based and therefore is susceptible to slippage during rain fall events.  The children were then introduced to the importance of planting vegetation as a natural mechanism to hold top-soil in place.  They were subsequently asked to identify the vegetation visible to them and were educated on the benefits of the sea-grape trees used in the re-vegetation exercise. 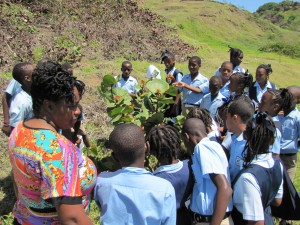 Students gathered around a ‘sea grape’ tree.  This tree is used in the Scotland District to bind loose topsoils and re-vegetate degraded areas. 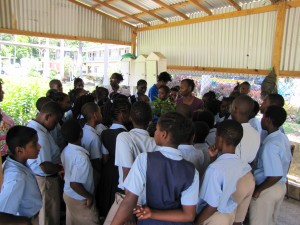 Students at one of the nurseries at the Soil Conservation Unit.  Staff educating students on the grafting process.

Barbados is fully committed to halting and reversing the harmful effects of land degradation which are evidenced in the Scotland District by engaging in biodiversity conservation, increasing land cover, clearer articulation and mainstreaming of sustainable land management plans and programs and importantly through public awareness and education and the engagement of our stakeholders.